Womad a means to an enz for Mike Chunn

Womad a means to an enz for Mike Chunn

Music man, author and mental health advocate Mike Chunn is in his element answering questions. Virginia Winder asks him about his life, a new book and his upcoming appearance at Womad.

The former bass guitarist for Split Enz and Citizen Band, suffered from debilitating agoraphobia for 18 years, but has always felt safe standing in front of an audience.

"I adore the stage. If someone said to me 'there's a stage over there, do you want to live the rest of your life on it?' I would say yes, as long as people kept coming in and looking at me doing something."

On March 15, he'll be on the Kunming Stage at Womad for the World of Words talking about his latest book, A Sharp Left Turn.

He's never been to Womad in New Plymouth but did attend the event in Auckland during the late 1990s. "I don't know why I've never made it down," he says.

Mike knows the venue well, having played at the TSB Bowl of Brooklands in the early 1980s with the old Split Enz line-up, when Tim Finn rowed around the lake singing Six Months in a Leaky Boat.

A Sharp Left Turn, written in a flowing, stream of consciousness style, tells the tale of a lad who found solace in the music rooms at Sacred Heart College in Auckland, was buoyed by supportive parents, Von and Jerry, discovered comfort in playing music, but off stage, especially travelling, lived with a distressing mental illness.

The book has a happy ending – he is proud of his 11 years as the boss of APRA New Zealand, revamping the "shadowy" organisation into a dedicated advocate for New Zealand musicians, upping its earnings from $4 million to $11 million and transforming the Silver Scroll Awards into a "beautiful party".

In 2003, he went on to create the high school song-writing competition, Play it Strange, to foster young musical talent. He's still the CEO, and a man with simple advice for any band starting out: Watch Jordan Luck perform.

"He goes to the front of the stage, which is a true test of a frontman who knows how to place themselves in the hearts of those in front of him. He's like that incredibly stretchy person in The Incredibles, his arms go right around the room to the far back and he brings them all in and they  vanish into his heart." 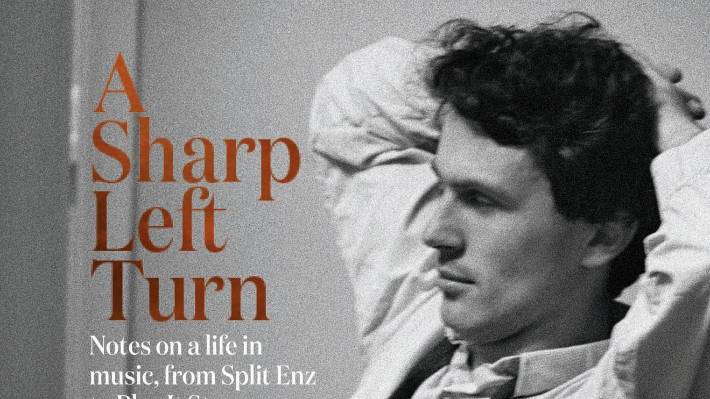 (In his latest book, Mike Chunn talks candidly about his long battle with agoraphobia.)

Although Mike has never written a song himself, he leaps at the chance to write books. He is the author of Stranger than Fiction: The life and times of Split Enz, published in 1992.

His latest publication is a boisterous book, best read wearing headphones, a music streaming service at your fingertips to follow the soundtrack of a song-filled life.

For this interview, he's at home in Remuera sitting in his favourite chair submerged in "deadly silence", while looking out on about 50 shapely trees of many shades.

"I'm like my father was. He would often sit in the chair in silence."

It's a contented stillness, not the awkward hush of young men not knowing how to communicate about band matters – but that comes later.

In his early days, Mike was a border at Sacred Heart College in Auckland, a school that has produced a star-studded line-up of musicians, including the beginning of Split Enz.

In his year was a teenager call Brian Timothy Finn, then came Mike's brother Geoffrey and Tim's younger brother Neil, who was at the school for a short stint.

"There were just two clumps of lads who were magnetically drawn together like mercury blobs, because of the times we lived in."

Mike started there in 1966, so his years at the college included the Summer of Love (1967), the height of The Beatles, and in 1969, Brother Richard took the English class to see the movie Easy Rider.

"How could you not be involved in that youth revolution?"

Dobbyn and his mob were also at the school in transformative music years with acts coming through like Led Zeppelin, Elton John, Cat Stevens and David Bowie.

"We grabbed a piece of the Northern Hemisphere and wanted to be like them."

While Sacred Heart was a hotbed of musical creativity, it was also a sanctum of silence.

"The nuns and brothers always told us to be quiet, and you were hit with straps or canes if you didn't. We left at the age of 18, kind of truly socially inept."

When Mike listens to his five kids, aged 18 to 31, he marvels at how they talk with each other and their friends in a constant stream of conversation. 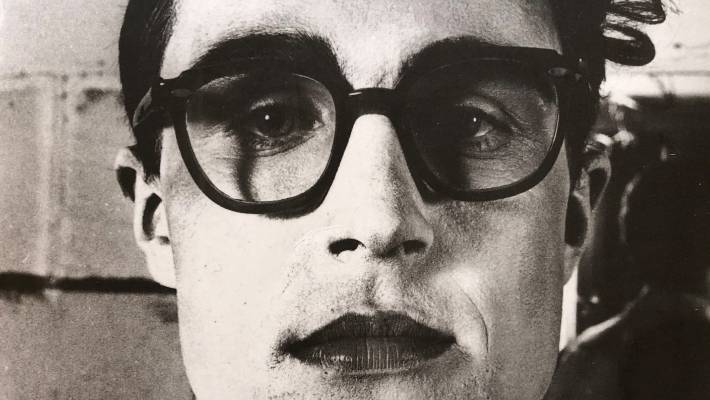 (When in Split Enz, the band members were able to 'concoct characters of great extroverted nature', Mike says.)

That was the opposite of his experience in the early days of Split Enz with Tim Finn, Phil Judd, Noel Crombie, brother Geoff, and Eddie Rayner.

"In the band if there was something we should have discussed, oh, oh, we'd better fire somebody, like that was going to change something."

Split Enz was a terrific and terrible time for Mike, who relied on tranquilisers to survive international flights, travelling beyond Auckland and to quell vomit-inducing panic attacks.

He told no one.

Mike couldn't even confess the truth to his dad Jerry, a doctor. But he did ask for medication to help with stage fright, which of course, he never had.

It all became too much for him on a trip from New Zealand to the UK via Los Angeles, where he was meant to stop, pick up a guitar and carry on.

At LA, he wasn't allowed to enter the country because he didn't have a visa, even though Split Enz had not long finished touring there.

That also meant he couldn't access his suitcase, which held his mind-soothing medication. He would have to fly to the UK without being dosed up on Serepax, a tranquiliser prescribed by his dad.

"Having no pills is a bit like being in the trenches in World War I and the guy says, OK, we're counting down, 10 to 1, 'but sergeant I haven't got a rifle or anything', tough, don't worry about it, you can't get it because you haven't got a visa, so you go over with your bare hands," he says.

"I had no choice but to board that plane and at the end of that flight I was so ravaged, I thought 'I just can't go on'."

During their rehearsals at the Chunn family home, Jerry, also a poet, would delight in sitting on the top stairs listening the young men practise.

Mike's mum and dad were huge advocates of their sons' music careers.

Although Mike gained a degree in engineering from Auckland University, he never stepped foot on a construction site.

His passion was music and when friends of his parents questioned his bass calling – after all he could be building skyscrapers – the naysayers were diverted with un-divided support from Von and Jerry.

Mike's ambition to be a musician was written down in 1967. In the fourth form he was asked to write an essay about an aspiration.

"My dream was that I was in a band and we sold out the Auckland Town Hall, which of course I thought was completely impossible."

That came true with Citizen Band.

The young men had been visiting schools around Auckland playing 20-minute sets to give teenagers a taste of their offbeat style. The town hall sold out and was packed with youngsters keen to see a full show.

"We sold out the town hall too, with Split Enz, a few times," he says.

"At the town hall I would look at the floor and wonder if John Lennon stood there, or The Who, Small Faces, the Rolling Stones… it's just a magical set of boards to stand on."

Other stand-out shows were with Split Enz. 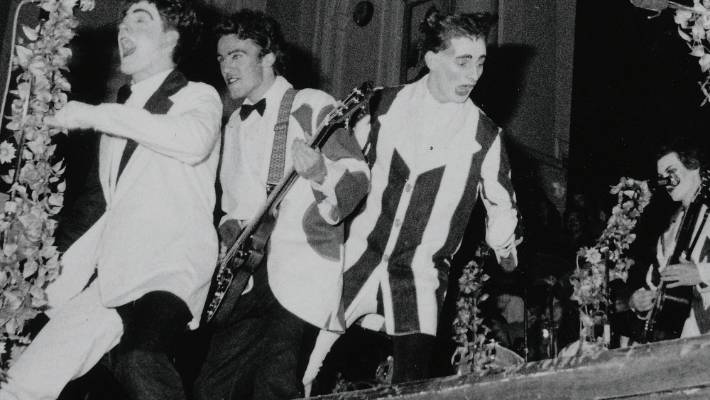 The first was a Buck-A-Head concert at Her Majesty's Theatre for 1100 people in April 1974. "Up until then our live shows, we'd had a few, and they were pretty pathetic. I thought this was dangerously risky."

But the lads were in top form for the sold-out crowd. "We just killed it. It was such a triumphant night."

After stints in Australia and the UK, Split Enz turned up in the United States, where recording company, Chrysalis, did its best to milk the band's zaniness. They had even produced a clay sculpture of Neil Crombie's head with holes in the top to grow a crazy plant hairstyle.

Their American zenith was playing at the San Francisco Boarding House. "At the end of Another Great Divide, which would have been about song No 5, we got this standing ovation. And we just thought wow, San Francisco, what haven't they seen?"

The low points were all around the agoraphobia, an anxiety disorder caused when a person perceives their environment to be unsafe with no easy way to escape.

Mike's safe place was either on stage, tranquillised or in Auckland – until 1991, when he landed the job with APRA, which came with an enchanted word, security.

Like a moment in a sci-fi movie, the alien creature inside him was conquered. The agoraphobia never came back.

In 1996, a book was released called Seven Voices: Tales of Madness and Mirth in which Mike talked about his years of living with a mental illness.

"That's when I came out and the Mental Health Foundation asked me to be in the Like Minds, Like Mine television campaign where everyone saw me."

People asked him why he was on telly and he explained about agoraphobia, which led to many conversations.

"There were some incredible moments," he says, choking up.

"In a bank, a bank teller, a woman says to me: 'I want to thank you for doing the Like Minds Like Mine campaign.' I look at her and say are you OK? And she says no. Both of us were crying and I had to turn around and say to the queue behind me, sorry guys go to another queue, because we're talking."

That happened in the street and other places. "You've got to talk about it," he says.

"I got the sense that they've told nobody but me."

He speaks candidly about his mental anguish in A Sharp Left Turn, written mostly on quiet Sunday afternoons, between November 2018 and May 2019.

"I'm lucky I can easily recall everything," he says.

Sitting on a Scandinavian chair his dad used in his allergy clinic, Mike worked at a tiny table and wrote on an i-Book, a five-year diary filled with brief notes at his side.

When he was writing, Mike was never alone.

"I've always got my father figuratively looking down on me, because I thought he was a wonderful writer. So, I'm tipping my hat to him, 'I'll pick up the pen Jerry and keep going'."

Caption: Music allrounder Mike Chunn placed a $2 bet with a 32-year-old Jacinda Ardern, publicly saying she would be Prime Minister before she turned 40.